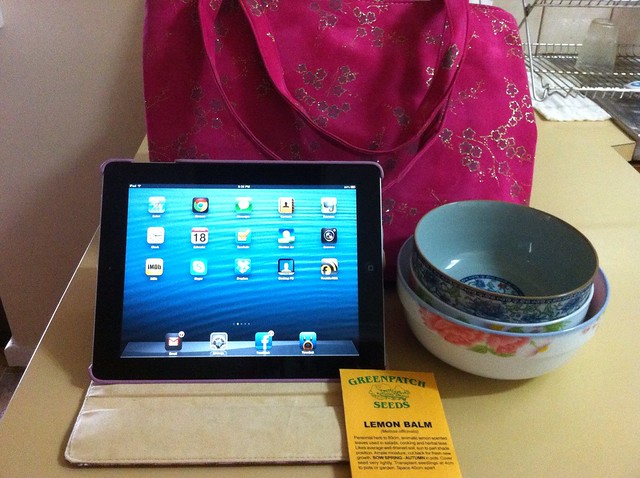 Thursday was my birthday and I had a busy day out with Rod so thought I’d share what we did and how I celebrated 51 years on this earth.  We had to be in Nth Adelaide by 10:45am but we got lost because Melbourne St kept eluding us. It’s a main thoroughfare yet we missed a turn and ended up going in circles. We left home late and without coffee so combine that with being lost, having only my phone for a GPS and it was cloudy so it kept recalculating. I can’t read maps well either. So after we blew up at each other I made Rod pull over and look at the map. We got closer but were still lost. I finally found the right place on the map that matched where we actually were and somehow we finally got where we were going.

My appointment was with the eye specialist for a special test requiring a machine he only has in his N. Adelaide office. Early on when I realised we were going to be late, I rang to let them know. As it turns out they were also running late so that at least worked out. There was nowhere to park and usually I just pop out and ring Rod to come get me when I’m done but he didn’t have his phone as he’d sent it in for repairs earlier this week. So I left him my phone and hoped I’d be able to use the phone in the doctor’s office when I was done. That panned out fine and I also aced my tests (field of vision and glaucoma).

So with that drama over we found our way to the Central Market in the city and made a beeline for the International Food Court for a beer and a feed. Love the cheap lunches there. All you can pile on a plate for $6.50.  It’s not the healthiest of foods, but it is yummy. Once we were topped up with food we moved on to our next plan.  I had a full shopping list of really miscellaneous items to pick up and one elusive item we searched for last month there and didn’t find.  Sometime ago I found and picked up a bottle of what I thought was hot mustard sauce. Well it’s mustard tasting (but not deep yellow) and when you use a drop or two on a spring roll or dim sims you get a lovely bit of ‘pain’ and instant sinus clearing – and then it goes away… so of course I have to do it again and again as I really love the heat, the temporary pain and oh yeah, having my sinuses feel clear every once in a while.  The bottle I’d had in my cupboard had languished unopened for over a year because the label was in Chinese and I forgot what it was. When I finally opened it one day I was thrilled to find it was something I remembered from Chinese restaurants in the states. I put it in a dropper bottle, knowing it’s potency. Within a few months we used the whole bottle up and silly me, I hadn’t taken a photo of it so didn’t know what to ask for at the Asian groceries. I knew it came from one of the Asian groceries and there’s only a handful I’ve visited. So my plan was to visit one or two of the other places we hadn’t been to last month to see if I could find it.  Within minutes of walking into the first of the only two possible places it could be, I recognised the bottle.  This store had an English label on it in tiny writing so I finally know what magical elixir I’m using.  Mustard Seed Oil. Oil. Ahh. Not a sauce.  Mystery solved.  I bought 4 bottles and the lady who rang up our order kept asking me if I was sure I knew how hot the stuff was. Imagine her surprise when I told her we’d already finished one bottle of it and that’s why we’d come back for more.  She either thought we were brave or stupid. Maybe both.  This is definitely something used by the DROP, though. So maybe she’d only tried it in a larger quantity. (Yikes what a thought).

While browsing in that shop I was really surprised to run into something I’d chatted online with a friend here in Australia about – she’d asked me once to explain dark and light Karo syrup.  I found both.  I didn’t look at the price but imagine it wasn’t cheap. It wouldn’t be something I’d use. But at least if anyone ever asks me, I know where to find it. We then did a trip around ALL of the aisles of the Central Market, stopping at a few stalls for various bits and pieces. I found some cheese I’d never tried before and bought a small amount of it. I thought it was rather expensive but when I got home and looked at the photo I’d taken of the name of it, I saw the price – um. $59.95 a kilo.  Lucky I only bought 140g – about $8 worth. The cheese is imported Dutch Reypenaer VSOP and has been matured 2 years.  There must have been a big import of it as I noticed it in a few of the bigger cheese stalls.  I LOVE the cheese stalls at the market. If it weren’t for Rod being a bit impatient at shopping I could definitely spend a lot of time (and no doubt money) on various wonderful cheeses. The variety at the market is amazing.

The rest of my food list was pretty typical for us – mushrooms, onions, capsicum (red & green peppers), and anything else that looked good. Once I’d found all the produce I wanted we went to our usual favourite Asian grocery in the Market – Kims – and Rod stocked up on a few kilos of frozen raw prawns (we buy a few bags each year and it tends to last us several months).  I went on the look out for some new noodle bowls. I had two from the same store that I bought a few years ago and used every day.  Rod broke one and a few weeks ago I broke the other one, so I wanted a few replacements. Sadly they didn’t have the same pattern, but had one in the same style.  I took that and a medium and small bowl in another pretty pattern.  All of the bowls are smaller than what I’d had, but that’s OK and a kind of gift to myself as well. I do want to reach my next birthday at a lighter weight. Smaller portions, smaller bowls.

Leaving Kim’s, we passed a small stand with clothing and other goods imported from Indonesia. Last year I picked up a beautiful skirt from there for only $5.  This time I found a lovely large zippered bag in pink with sparkly stars in the material for $5. It’s big enough and padded enough that I can stash my iPad in it for going out and it has a really nice lining in it too.  Bargain! Lemon Balm seeds.  OMG, I have hope. I have SEEDS to plant in the dirt in my back yard. Where I’ve never planted anything before because I could never be sure there was any permanency in our being here.  This. This is MOMENTOUS to me.  I’ve been keeping my eye out for lemon balm since I moved here 15 years ago. It’s hard to find at nurseries in seedling format and I haven’t ever run into the seeds. I once found some dried lemon balm at a shop in the Market but that’s been long ago used up.  We were on our way out of the market and passed by a shop that I think is where I found the dried lemon balm last time. They had a wire rack with seeds in packets and as I walked by it, I thought I saw the word ‘balm’.  I walked a few steps further and when my brain caught up with what I’d seen I had to turn around and go back.  It was indeed what I thought it was and you better believe I bought a packet. A packet of hope, encouragement, and faith. Oh yes, I feel that strongly about these little seeds.  Not only is it hope and encouragement to go forward and dig in the dirt and plant something I hope will be there for a long time to come – with me enjoying it as well, but also this plant and me have an affinity with each other.  It was growing at my home in Saginaw and I always loved the smell when I crushed the leaves.  I dried some one year and the day I stripped the leaves to put them in jars for making tea with it, I had a bad cold with a stuffy nose. It took most of an afternoon to harvest the leaves (it was a good crop), and when I finished for the day a miracle had happened. Breathing in the lemon balm while stripping the leaves cleared my nose and the cold was gone. I also found that the tea helped with headaches and it never failed to help with sinus and cold issues. We all know my health is on the shaky side (heh, no pun intended there), but to find seeds for this plant… I don’t know, it just gives me hope for a better year health wise too.

So that was our big adventure in the city on my birthday.  It was a fun day and I found some nice things aside from getting lost and oh yeah, forgetting to have coffee for the whole day (gasp!) it was quietly special.  And I found hope. That’s a pretty big find in a little packet of seeds.

20Feb22 I was searching for something to make for my Sunday dinner that was a bit different. This was different! This was roasted sweet potatoes covered with prawns and then a fancy Piri Piri topping. It was stunning. I found the recipe at New Idea Food (17 April 2019) - "Sweet Jacket Potato with Piri-Piri Prawns" and the recipe was actually for one person. It turned out amazing. #2022pad #cooking #cookingforone #sundayprawns

5 Jan22 Neurmal hides herself in one of her little cubby holes. I think she's checking to see if anyone is watching. #catsofinstagram #playinghideandseek

8Jan22 I set up my oil diffuser for an hour of really nice fragrance and set the colours on the diffuser to random. It's a nice way to end the evening. #2022pad #diffuser #aromatherapy #relaxing

7Jan22 My Christmas card from America came with an official NASA First Moon Landing stamp. Which I'm keeping. That was part of my childhood. #nasa #moonlanding #stamp

7Jan22 Yes! An American Christmas card! This was from my son and daughter in love in Texas. #2022pad #belatedxmascard #lovefromafar

9Jan22 More awards! I had a perfect week for moving (burning calories) and for getting in 7 workouts in 7 days. #2022pad #applewatch #fitnessawards #7workoutsin7days

How Much is Too Much?