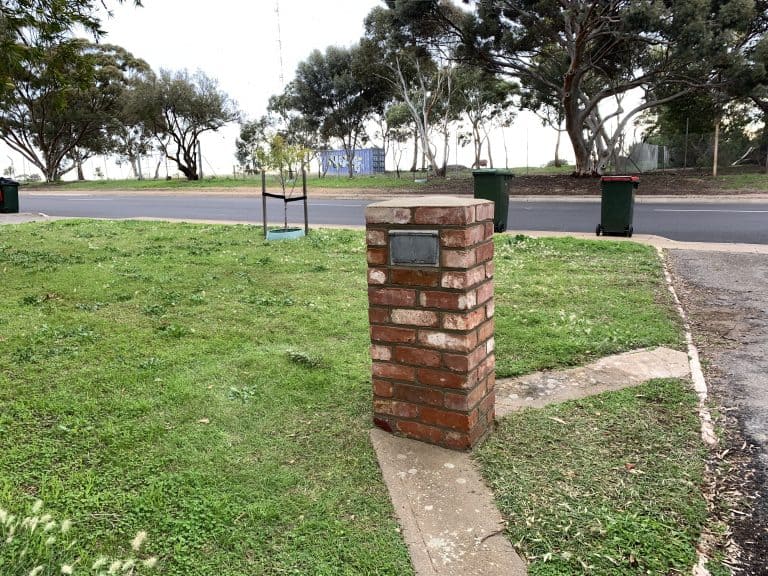 On Easter weekend a drunk driver hit a truck parked on the street, which lurched forward and knocked over my almost indestructible letterbox that Rod’s dad made in the early 70’s. He’d put it together with 3 steel rods so it couldn’t be destroyed by teenage boys playing with explosives. The rods survived but it took two of Rod’s friends to put them close to upright again.
A brickie friend, John, offered to build me a new postbox. I have had the titanium hip and femur rod that was put in to keep Rod walking when cancer was removed from his leg. I’d wondered just what on earth to do with it but knew it had to be something special. I mentioned to John about adding this to the inside of the new box. He said it would be his honour.

Some interesting things about my new letterbox
(that’s a cleverly camouflaged memorial to my husband):

17Feb22 I had a nap and these two decided to have their naps with me. Those who've seen my other cats on my bed photos might notice ... today they decided to swap sides! The book I'm reading is "Your Head is a Houseboat" by Campbell Walker. It's a great book and I love the illustrations (also by Campbell Walker) @struthless69 #2022pad #catsofinstagram #tripodkitty #threeleggedcatsofinstagram

11Sep22 I take a photo of these whenever I do a test because with catarachts I don't trust my eyes. It's easier to see for sure if there's a bottom line from the camera. Then I let them hang around so I know the date I last checked. Anyone else do that? This is called a RAT test in Australia. #2022pad #covidnegative #justchecking #covidrattest #rat

Hoping this makes a difference