There are a lot of things to catch up on, but first let me get this little bit out of the way first as it’s my reason for writing today.

A week or so before the court case (explained below), I saw an offer for a clearance priced MacBook Air because it was last year’s stock. I hemmed and hawed about it as I’ve wanted a mac for a long time for writing. One of the compelling reasons for wanting it is an app named ‘TextExpander’ that I use on my iPhone. The full Mac version works anywhere on the computer. It lets me define ‘snippets’ for common words, sentences, etc so when I’m writing I just type a couple of characters and whole words pop out. It also works for longer things like addresses or often used web links. The last time I had anything similar was on my Commodore 128, using Rod’s QWKRR offline reader. I’m the one who suggested typing macros to him and with my input it was added to the software. I loved it for writing as it lets me concentrate on composing rather than typing.  I’ve missed it for many years.  I’d also recently traveled to Tasmania and had to leave my old laptop at home as it was too heavy to lug around.  I took an older netbook from Rod’s TAFE study days but found it too small to be of much use. The MacBook Air is very very light and thin. I’d be able to take it more places and actually use it away from home.  While I was in Tassie, I’d talked to my friends about the fact that now I’m feeling better and my brain seems to be working I’m enjoying writing again.  All these elements went into my decision and I only had a day to make up my mind since it was on a site that offers deals for 24 hours. Another thought that went into it was ‘get it now before the lawyers have all our money’. If nothing else, I might be able to write for publication again and maybe recoup the cost. So I went for it.

Some of the time I spent sitting outside the court room during the case was spent researching the new computer. I’ve never owned a Mac before so wanted to learn as much as I could before it arrived. It gave me something to look forward to that had nothing to do with the current events of that week.

I’ve had the new computer for a little over a week now and it’s slotted itself into life rather well. I’ve been able to do quite a bit with it and can take it outside or into the bedroom to do stuff, although I’ve found I prefer to have it on the slide-out table built into my desk. I can then turn to use it and it’s out of the way but available and makes a good place for it to be while it charges. And yes I love being able to use the TextExpander everywhere. It’s amazing. 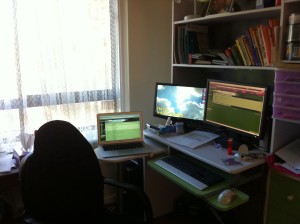 For as long as I can remember, I’ve always had this vision of myself writing, facing a window and being able to gaze the scenery while composing my words. Yesterday I was writing a letter using the Mac and found myself gazing out the window trying to think of just the right word I wanted. It hit me. THIS is what I always saw for myself ever since I was a teen. It was such an odd and powerful feeling, it’s hard to describe. When I located the Mac here I didn’t do it because of the window. It just seemed to be the right place for it to be.  So that’s the dream that’s been realised. It really blew me away.

OK, now the other stuff.  I had an Iron transfusion in July. This was done just like a blood transfusion and took a couple hours. Rod’s been amazed at the get up and go I have and has been shocked when we’ve been out that I’m actually walking faster than him.  To say it’s helped a lot would really be an understatement. I hope this lasts.  Sometimes it was hard to tell how much was depression and how much was the lack of iron causing me to feel exhausted all the time.

In August, my friend Vicki and I visited our dear friend Snuva (not her real name) in Tasmania for four days. We were supposed to arrive before the baby did, but little Eskil had other ideas. We landed the same day he and his mum came home from hospital. We’d planned to help with organising the baby’s room and stuff, but found it was better if we were out of the way so we rented a car and did some amazing things. We took a tour of the Cascade Brewery, took a tour at Cadbury’s chocolate factory, saw some tesselated pavement which I’d never heard of before, and visited Port Arthur, doing both the boat and walking tour. And we got lost on the way back and ended up going 140k out of our way.  I’ve got pictures from our trip on Flickr.

A week or so after returning from Tassie, was the court case we were dreading. It had to come sometime, and we’d been living in limbo for the last 5yrs waiting for things to be settled. This was all about Rod’s Mum’s house and two wills.  It was also about a promise Mum and Rod had agreed upon in the 80’s that he would live with her and be company (as well as paying bills, rent and for house upgrades). In exchange she made out her will so that he would receive the house in the event of her death. What he didn’t know was shortly after I’d arrived that will was changed. Had we known at that time, we could have bought our own home but several years down the track that wasn’t possible. Lots of family stuff happened around that time and I probably missed some of it as I was in hospital for a week after my breast reconstruction (this was a major surgery – much more major than the original mastectomy).  Many more things happened than I could possibly write here, and really, I’d rather not write about these things. So there was a court case. We thought it would be a day but it turned out by Wednesday they were all looking at it going on into the next week.  The judge kept urging everyone to settle.  We thought our lawyer told us about an offer the other side made and decided it was a good one and to accept it. Turns out we misheard, but that’s OK. While waiting for the courtroom to be opened after a lunch break, Rod’s brother came up the stairs and so Rod told him we’d accept and of course since it wasn’t an offer from the other side, Rod told him what we’d agree to and thankfully, his brother(s) accepted the offer.  The gist of the results is that we pay Rod’s siblings a sum of money each, we pay all court costs, they get what’s in the bank, and we have the choice of taking ownership of the house (Rod’s dream) or selling the house, paying for the court costs from it and keeping the balance from the sale.  We need to get a loan to pay for the court costs, but we’ll be able to get a loan to cover this so it won’t be long and we’ll be homeowners with a mortgage.  Our five year plan is to have that paid off and from the looks of things we should be able to do that.

Up until now, we were limbo. We really couldn’t make any long range plans because we had no idea where or how we’d be.  The quote ‘Come grow old with me, the best is yet to be’ seems so apt.  My husband is smiling these days. That’s something I’ve not seen in too many years.

There’s plenty of other things for me to write about but I shall leave it for another day.  As I type this the trees are gently swaying in the light wind and the sun is shining on our lawn. It is so good to have my little ‘writing spot’.  I’ve waited most of my life for this little nook!

5 Jan22 Neurmal hides herself in one of her little cubby holes. I think she's checking to see if anyone is watching. #catsofinstagram #playinghideandseek

17Feb22 I had a nap and these two decided to have their naps with me. Those who've seen my other cats on my bed photos might notice ... today they decided to swap sides! The book I'm reading is "Your Head is a Houseboat" by Campbell Walker. It's a great book and I love the illustrations (also by Campbell Walker) @struthless69 #2022pad #catsofinstagram #tripodkitty #threeleggedcatsofinstagram

Before it’s Too Late…

Getting into new habits