Today marks the end of a very long and stressful period of our lives. On October 10th 2006, after months of deliberation we finally agreed to Rod’s Mum’s pleas for us to move back in with her and take care of her. She’d had two strokes and was in rehabilitation. She wanted us to move back in so she wouldn’t need to go to a nursing home when rehab was finished. We kept that promise and she then fixated on trying to make sure that Rod would own the house if anything happened to her, which was part of an agreement they had made many years before I came along. Unfortunately she wasn’t able to achieve that last part before she passed away on November 4th.

There’s so much I could write about the following months and years but I think it’s best to leave the past behind now and greatly simplify all the history to just the bare essentials. There were arguments with Rod’s siblings. There were lawyers and a court case. There was an agreement. We celebrated. Then the lawyers sent us their bills which were twice as high as we were told they would be when the court case was settled, which dashed our hopes completely. The invoices arrived about a week before Christmas. We were devastated.

A long time later we put in a complaint against our lawyer for several things he did wrong including inflating his bill. The complaints agency acted as a mediator and got him to reduce his fees, but the other lawyers refused to budge.

Without much hope, we went back to the home loan people with the new figures. After a mountain of paperwork, we were approved. There was another law agency that were responsible for Mum’s Will that needed to be contacted for details before the loan could go through. They didn’t respond to phone calls, letters and email from the home loan people, holding everything up. Fortunately the home loan people decided to push through the loan without their assistance. This did the trick as that agency eventually decided to respond. It was the same law offices that dragged their feet when Mum asked for her Will to be changed in the weeks before her death. They finally contacted Rod just minutes before she started on the morphine hours before her death.

Today the settlement for the house has just gone through, ending 7 years, 5 months and 23 days of the darkest days my husband and I have ever had to go through. We have a mortgage that pays all the lawyers off that we’ll still be paying in our old age.

We have certainty finally. I don’t have to dread answering the door for fear of it being someone coming to evict us. This was probably an irrational fear of mine but it’s been with me for over 7yrs. We can make changes, plant flowers, and most of all, simply live life without this hanging over our heads keeping us in limbo all these years.
On one of our visits with Mum, she seemed to know time was running out for her and she wanted things to be sorted out as soon as possible. At that point we were more concerned about her than the promise she desperately wanted to keep. I assured her everything would turn out okay. I believed it when I said it, but in the years since I’ve had to remember the conviction I felt that day and remind myself it was a promise to her we’d do our best to keep. 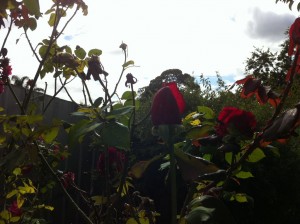 Finally, her dying wish has been fulfilled. Our promise kept, and we plan to spread her ashes in the rose bushes she loved. A new chapter of our lives begins today.

12Sep22 Once upon a time I used to take 12 pictures on the 12th day of the month. Lately all I manage is one or two. Aside from the photo being crooked, I think my desk looks pretty nice these days. My monitor is right on the desk. I've found this is the most comfortable position for it, and I still have issues with neck pain and not seeing clearly but both those things, as much as they affect my working life and enjoyment of my computer, are not caused from the monitor or the height. ...