Tonight I took it upon myself to figure out  the speed and time to set my Bellini (like a Thermomix, only not as expensive) to chop onion or capsicum without it turning into mush. There are times when mush is great – like for flavouring a stirfry – but other times when you want your veggies to be recognisable and about the size you might chop them by hand.

The answer for anyone interested is 3 seconds on speed 5.

If I were making a stirfry and wanted some onions to serve as a decoration, those I would chop myself. It’d take longer than 3 seconds but would look prettier. 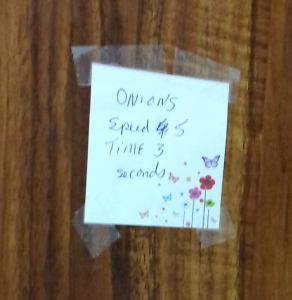 After making note of the speed and time – literally on paper – I taped the paper to the inside of the cupboard closest to where I keep the Bellini.  Because have problems remembering simple things and even had to refer to the note when I wrote the above.  At some point I might make the note a lot neater or add to it.  But meanwhile, this will do nicely.

I now have several cups of capsicum in small bags in the freezer as well as a few bags of chopped onion.  This was my plan all along, but it gave me a chance to experiment until I found what works consistently – and practice makes perfect!

For tea tonight I had bought some bagels and had a few 90g packs of smoked salmon in the freezer.  The plan started with just having toasted buttered bagels with the sliced smoked salmon on them. While having my experiment time with the Bellini I came up with a better plan.  I did the onions, then chopped up a bag of capsicum, and I put some of each back into the bowl along with the salmon, some dried dill, a bit of crumbly blue cheese and the dregs from a bottle of garlic sauce.  I gave it a quick whiz on speed one for 3 seconds, then gave it another 4 seconds. I pushed the mix down into the bowl with a spatula, put the cover back on the Bellini and put it in the fridge. About an hour later, once I’d tidied the kitchen and played some Bingo, we toasted the bagels and put the salmon mix on each, topped with a small slice of salmon I’d saved. It looked fantastic and tasted great. Also, very filling since the hubs toasted all 4 bagels when I’d only planned on us having one each. But it was sooo nice.

A friend of mine has been sharing her experiments with her Thermomix on a Facebook group and I wanted to share my onion / capsicum experiment so I’d have a record of what worked but figured I hadn’t added to my blog in a good long while so here it is.

19Feb22 Lentil patties with a quickly made garlic aioli and horseradish sauce for it. They turned out good, but it was quite a bit more work than I'd prefer. I still want to experiment with making other patties with lentils. I think they'd be ideal for lunches. I also liked the one lentil ball that I made from the same mixture. I think those were nice because it was just about two bites. Oh, and to keep me company there's my Mom (on the left) with my Aunt Viola on the right,...

20Feb22 I was searching for something to make for my Sunday dinner that was a bit different. This was different! This was roasted sweet potatoes covered with prawns and then a fancy Piri Piri topping. It was stunning. I found the recipe at New Idea Food (17 April 2019) - "Sweet Jacket Potato with Piri-Piri Prawns" and the recipe was actually for one person. It turned out amazing. #2022pad #cooking #cookingforone #sundayprawns

11Dec21 I tried a new recipe I found online that got me into the kitchen when I wasn't feeling too enthusiastic, but maybe because of my lack of enthusiasm (or the lack of good seasoning), it wasn't quite as good as I thought it could be. This was a pasta dish that involved layering the various parts into the serving dish. The first in the bowl is some cottage cheese, which I followed up with green onion and red bell pepper (neither of these were in the recipe) around the cheese. ...

20Nov21 Beef and Veg soup. I made a big pot using my Instant pot so it was done in just an hour or so and tastes amazing. I ended up with several freezer containers for those times I don't feel like cooking. #cooking #cookingforone #instantpot #soup #beef #veg #latergram

10Jul21 Sometimes you just crave a big bowl of roasted veggies. Today was that kind of day. Zucchini, red and green capsicum, onion and mushrooms. I added the last two items for the last 5 minutes so they wouldn't get over cooked. Delicious! #cooking #cookingforone #airfrying #airfryer #baking #2021pad