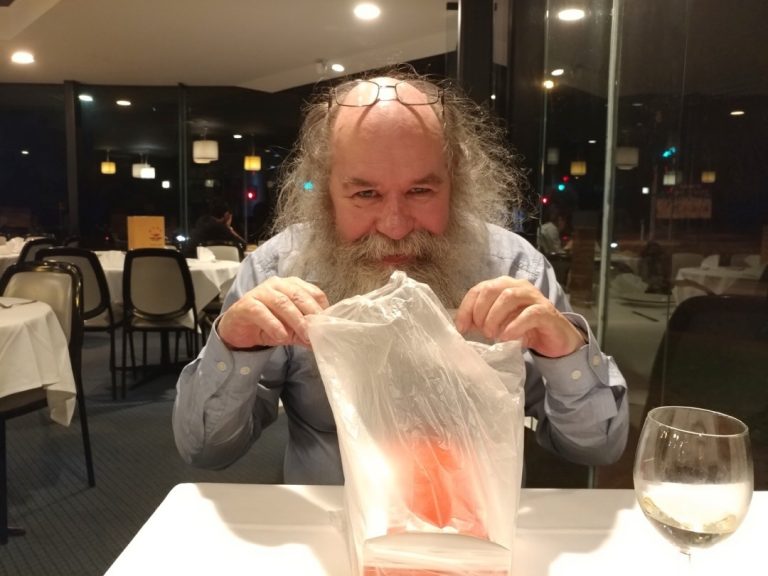 The last few weeks have been rough.  Very rough.  In mid-February, Rod was diagnosed with lung cancer.  On the day, he saw his GP who gave him papers for an xray and labs to be drawn.  Rod decided rather than to wait, he’d get both done on the day.  I’m glad he did. What followed was a series of various tests – CAT and PET scans, an ultrasound with biopsy and a bronchoscopy with another biopsy for the tumor(s) in his lung.  One is a big 7.1 mass that’s causing him a lot of pain and then there are two lymph nodes inside the lung that are also cancerous. The good news is that it hasn’t spread to other areas in his body, and it’s a better type, if there is such a thing.

Rod will start treatment on the 4th of April, which will be 8 weeks of intensive concurrent chemo and radiotherapy.  It’s brutal, but will give him the best chance of completely eradicating the cancer. To say this will cause changes to our life and schedule is an understatement.

Way back last year when my son and his fiance announced their wedding date, and made plans for me to travel to Houston for it, I had some really hard to articulate vibes, not about the wedding (I’m over the moon for Chris and Kelsie), but about my travelling there. It was a really big mixed bag of emotions since I’d be seeing family and my grandkids but there was an irrational dread that I couldn’t put into words, or even see in my mind’s eye what the dread was about. I also just couldn’t see me taking the trip. I had a breakdown in August. Some of that was due to health issues – my iron ferritin level had dropped down to way below normal – but a lot was because of the nagging irrational dread that I just couldn’t shake off. It took awhile to see specialists, but by December I’d had two iron infusions and was seen by a psychiatrist for a review of my issues and medication. So in January I transitioned from my previous meds for depression to a new one. The vibes about travelling remained though.

When we saw the cancer specialist last week, he was already aware of my plans to visit the states in May from our previous appointment. While he was outlining what the next few months were going to entail, he asked about my plans again. I’d already given it a lot of thought while we were in limbo waiting the complete diagnosis and treatment details.  I already knew Rod wanted for me to be able to go, even if just for the wedding, and he was going to object to my decision.  However, going overseas for only a week or two wouldn’t give enough quality time to spend with people and I also wouldn’t have a chance to recover from the trip to the USA and I’d be pretty worse for wear after returning for the same reason. When I go (and I really DO want to go), I’d like to have time to spend with people and not be worried about my husband back home.  So when the doctor asked about my travel plans, it helped a lot that both the doctor and his assistant agreed that it was best if I stay and be with Rod during his treatments.  In that moment, between finally saying aloud that I wouldn’t be travelling and that Rod’s cancer hadn’t spread and wasn’t small cell,  I felt like a huge weight had been lifted from my shoulders.  I really wish I could lift the weight of the tumor off Rod’s chest to relieve his pain just as easily.

So if I’m not going to be travelling to the USA in the next few weeks, I’m probably going to need something constructive to work towards while Rod is receiving treatment and recovering from it. I remember when I was dealing with cancer treatment, much of my time between treatments was spent doing a lot of nothing because I had very little energy. If he’s having double the treatment in a shorter period, he’s likely to be doing a good deal of napping. He’s already doing that now because of the pain and pain medication.

My sister and I were chatting about how great it will be when I visit when the time is right, and the kind of things I’d like to do while I’m there. While chatting I was telling her about a conversation I had with my daughter who is an adventure hiker, cartoonist and illustrator.  She’s likely to be hiking in remote places, so our meeting up could be a bit interesting. I’d told my daughter that I’d be happy to travel and meet up with her and her husband at a town near where she’d be hiking.  Telling my sister this, she thought that would be awesome so I added wouldn’t it be great to spend a day actually hiking with them. Hanging out in their natural environment (heh).

I started to think about what that would require of me and the obvious first thing is being able to walk for much longer distances than I’ve ever done before.  Why not train to do a 5k walk, and take it from there?  Sure, 5k wouldn’t be enough for a full day’s hike, but it would be a good starting point.  If I can achieve that, I can keep training towards longer walks.

After my chat with my sister, I was so excited about the idea that I posted on Facebook about my idea to train for a 5k walk so I could do some hiking with my daughter when I visit the USA. The support I received was great. One friend said “That sounds like a wonderful idea, a way to focus energy, decrease stress, and improve fitness. You go girl!”.  That pretty much sums up my thoughts too.  It ticks all the boxes for something constructive I can work on while Rod is in treatment and recovering. It’ll help with feeling less stressed, and geez, wouldn’t it be great to be able to walk longer than I currently do with maybe more flexibility and less pain.

I’ve been reading up on training for a 5k walk and most of these are short 5-8wk training schedules that don’t look much different to my own strength training schedule with the exception that the days I’m not doing weight training, I’d be walking for x number of minutes that gradually increases. Saturdays are for walking a specific mile target and Sundays are all about walking for an hour, but not at a difficult pace and with rest breaks if needed. Since I’m not in a rush, I can stretch out the time scale easily. I can do this!

I’m starting with walking 10 minutes each day because that’s my pain limit (when my hips start hurting). The training things I’ve seen start at 15 minutes. I’ll move on to that after a week or two. If that’s too hard at first, I’ll make it 12 minutes. This is in addition to getting my regular step goal throughout the day, at least until I’m able to walk for longer time periods.

I also think Rod might enjoy the weekend walks. He’s currently doing 1km walks every day even now on the treadmill. I’ll be using the treadmill for most of my daily timed walks as well.

I have no plans to do any official walks at this point. It’s purely to see if I can do this, for the personal challenge, and to be able to spend some time hiking with my daughter. Meanwhile it has lots of other benefits!

Not the best of days…

Shake it out gets a new meaning