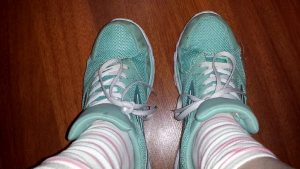 I’ve been meaning to write this blog post for about three months now.  Last week, I celebrated six months of meeting my step goal every day.  Three months ago I was going to have a review of any changes that have taken place during that time, but now it’ll have to be at the six month mark. I’m OK with that.

So, besides finally really creating a habit of walking every day, what have I accomplished?

The bad news is I haven’t lost much in the way of weight.  In November last year I was 97.6 kg and by mid February I was down to 90kg.  I started my current walking streak on the 28th of February, so I can’t really credit my streak with losing 7kg. And since then, my weight has fluctuated between 88 and 90 – mostly around the 90 mark.  I’m not feeling bad about that because I’d rather have a plateau than be gaining weight. It means I’m holding steady. Even though my weight hasn’t changed much, I’ve lost 4cm in my waist.

Where the big changes have taken place has been my health.  I haven’t had a cold or flu in the last six months. The only ‘illness’ I’ve had is when I was hit in the face and body by the boot lid coming down on me on a super windy day and a weird viral infection in my eye.

My glucose results have been the real winner.  In January, my usual readings after meals were in the high 8’s and 9’s with several over 10 mmol.  My last HBA1c test showed my overall glucose for the last 3 months down to 5.6, which is so much better for me.  My averages these days are in the 5’s, and I’ve had to keep an active eye on things to make sure my glucose doesn’t go too low now. In fact, we’ve reduced my medications twice now to balance it back to slightly higher (but normal) levels. Less medication. Wow! 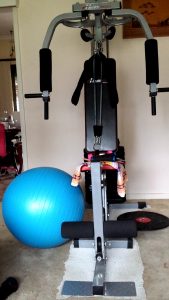 Another unforeseen bonus has been that I actually like gym days now.  I do several things in our home gym right after another and then ‘rest’ while walking 3 circuits around the house before doing the next set in the gym. Often by the end of my gym time, I’ve reached my 4200 step goal for the day.

Awhile ago, Fitbit added a new thing where the app encourages you to get at least 250 steps every hour.  That’s not a lot, and not hard to do – 3 circuits around my house gives me about 300 steps. So when I’ve been at my desk and the clock tells me it’s at the top (or bottom) of the hour I go do my 3 trips around the house and come back a bit more refreshed. It also stops me from getting to stiff from sitting too long.  I’ve purposely kept my step goal low with the thought that it’s better to have an achievable goal than to set the bar so high I can’t hope to reach it.  I haven’t changed the goal because I’ve found that most days I tend to average more than this and that’s been thrilling to see.  The goal is 4200 but according to Fitbit my weekly averages are around 5,500 a day, and this seems to be on the increase. My other half has also helped a lot with a bit of friendly competition. He tries to catch up with my weekly step count or I try to catch up with his. Either way, we both win and are better for it in the long run. 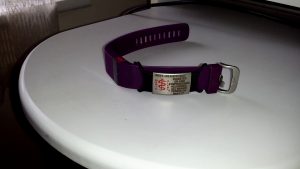 I think my mental health has improved too.  In the past, my worst, most depressed days were when I’d just go to bed and not bother with anything for the whole day. I still have moments of being down but not as much as I had been over the last few years.

Not everything has changed. The osteoarthritis is still here, I still stiffen right up if I sit, stand or lay down for any length of time, I still have osteoporosis and my balance is still wobbly.  But it’s nice to have a few more things going right than wrong lately.

Last, I really must thank all the wonderful people who have encouraged me and ‘liked’ my Facebook and Twitter status post.  The Facebook posts are automatic when I reach my step goal for the day and the Twitter one is just the daily stats for the total amount each day.  Your encouragement and cheering me has made me smile, kept me going on the rough days and I can’t thank you enough for being there for me!