Gift Certificate Give Away

(This blog post is written for vapers – people who use electronic cigarettes – I promise to post a more personal update in the near future!)

A couple months ago, I won $100 in an online contest and decided to treat myself to some ‘pre-mixed’ ejuice from the USA. Ever since I started vaping last October, I’ve always used 0mg Nicotine ejuice doublers from Australian vendors and mixed it with nicotine. As there are many overseas vendors that sell ejuice with nic already added, I wanted to give a few new flavours a try. What a little luxury it would be to get some juice in the mail all ready to vape with no mixing or waiting a week or two for it to steep. Well that was my thought process. Things didn’t quite go to plan though. 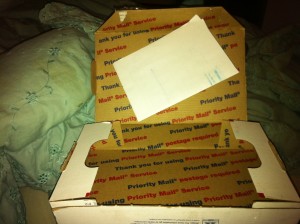 When my box arrived from the vendor, it was empty aside from the invoice. I paid $20 for shipping and it showed up empty. I took photos immediately and sent an Email to the vendor and described the box condition to them. Their reply is that it must have either been Customs or the package was tampered with as there was an additional bit of clear packing tape that they never use. I’ve had parcels opened by Customs before and have even had something confiscated (my Sis sent me hot cocoa mix which was removed because it contains powdered milk). When customs opens a parcel, a sticker is added to the box and if anything is removed it’s itemised with the reason why it was removed. There wasn’t a sticker on the box and as mentioned, the only thing in the box was the invoice. I’ve contacted Australia Post and put in an official complaint about this saga.

Meanwhile the vendor, Juicy Vapor, was nice enough to offer a gift certificate for the amount I purchased, which was really nice, but I can’t justify the cost of postage to re-order.

So I have a gift certificate that I can’t use, but I know there are many USA vapers that would probably really enjoy trying some new juice so here’s what I’ve decided to do about it. I’m going to take nominations – use the form below to nominate someone you think would love to receive a $60 gift certificate from Juicy Vapor and what makes them a good candidate. You can nominate yourself if you wish, that’s OK. But what I’d like to do is give back to someone who helps out in the vaping community or possibly needs a bit of a bit of a boost. The main criteria is that they live in the USA — because otherwise the recipient would be up for paying very dear postage costs and the idea is to avoid that if possible. I’ll take nominations until Midnight on 15 May (South Australia time), choose 5 top contenders and then use random.org to pick the winner, which I’ll announce here on 16 May.

Make sure and use the form below to make a nomination, and also use the Twitter and Facebook links to share this blog post to give as many people as possible the chance to win the $60 gift certificate from Juicy Vapor. Let’s help make a fellow vaper smile!

A winner has been chosen and will be announced as soon as I hear back from them. Thanks to everyone who made nominations. You’re all wonderful caring people!

Things I learned while finding the right mix

18Dec21 My older vapes were starting to show their age with their internal batteries just not being what they used to be. So I retired them and replaced them with these two beauties from @VapeKingau. These are the Innokin Kroma 217 and are really quite nice to use. They use a single battery of 18650, 20700, or 21700. I'm using a 207 in one, and 217 in the other. The little vape on the side was a surprise gift from VapeKing! It's a Voopoo Vinci pod that actually gives an impressive ...

Things I learned while finding the right mix