I’m still finding my way when it comes to vaping and giving up the smokes. Sadly, I haven’t been the lucky type that could immediately give up on them and move right into vaping. First there was the nicotine issue. I’m able to handle a slightly stronger mix but have to be careful. There’s a very fine line between what I can handle and what I can’t. The moment that line gets crossed, I pretty much have to deal with asthma for the rest of the day. This makes it hard to find what works for me.

As an aside, what bugs me is that I’ve read a lot of people have less issues with asthma when they’ve switched to vaping. That may be true – I know when I have the mix of e-juice and nicotine just right I don’t have any problems at all and if I’m also not smoking on the day it’s even better. Meanwhile though, finding a good consistent, always right mix is still being worked out, which means the occasional bout of wheezing and using inhalers (how ironic is that?) 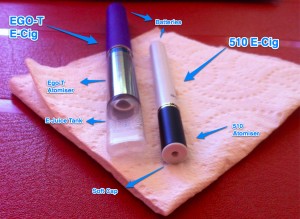 Taste and ritual have also come into play. One day last weekend while outside having a break (and yes, a cigarette), I pulled out some ejuice and experimented with all of my gear and through trial and error found that I really liked ‘dripping’ as it let me taste and try things without using too much and without really wasting anything. Dripping involves dropping two or three drops of liquid into the atomiser directly and then vaping that. There are ‘drip tips’ that you can buy so you’re not putting your lips directly on the atomiser, but I found the soft caps from my Boge cartomisers worked a treat for this and it makes my little 510 e-cigs look and feel more like a cigarette as it just covers the top of the atomiser. It’s amazing how far a few drops of liquid can go. Probably a little longer than it takes to smoke a cigarette. And there’s where ritual really helps. I’m used to sitting down, rolling a smoke, lighting it and then putting my rolling materials away. By using the drip method, it gives me a new ritual to associate with vaping – I sit down, take the cap off the atomiser, add a couple of drops of liquid into it, put the plastic cap back on and then vape away on it until the liquid runs out in about 10 minutes or so. You know when the liquid has gone away. The taste changes dramatically. This little ritual lets me know when my break is over and gives me a new thing to do beyond just sitting down and toking on the e-cig.

After finding that dripping really makes things a little better for me, the next discovery was comparing the ‘taste’ of my cigarette vs the menthol I was vaping. I decided I really needed the taste to have something in the background or to be a bit more like tobacco. When I received my first starter kit, I was sent a few samples of tobacco flavouring so I dug one out to give it a try. I found that menthol and PJ (a flavour similar to Peter Jackson brand cigarettes) flavours worked really well for me. The only problem was I only had a little bit of the PJ liquid and what I had was a ‘single’, meant for use when not using any additional nicotine liquid. It was enough to let me know I was on the right track, though.

I ordered a 5ml bottle of “VK4” tobacco doubler flavouring from Vape King on Sunday and had it in my hands by Tuesday. I mixed half of this into a 5ml bottle (being a doubler it makes a total of 10ml but I wanted to start small so I’d have a back up if something went wrong). The mix I made was 10mg nicotine, 40% VK4 and 10% menthol. Wow. Smooth as! VK4 is Vape King’s own formula on a popular tobacco flavour variant named RY4. This mix has caramel and vanilla in it. I can’t honestly taste the vanilla (maybe because my tastebuds are still shot from smoking) but the butter flavour in the caramel just makes me think I’m enjoying some really fancy desert. It’s not too sweet though – it’s just enough. And mixed with the 10% menthol it just gives it a bit of a higher note that (for me) is just right. This mix is the only one I’ve ever actually finished a 5ml bottle or 3ml tank. I had it in my 510 e-cig for vaping as well as in a 3ml tank on my Ego-T model which I guess would be the equivalent to having a spare pack of commercial cigarettes on hand for those times when rolling a smoke is inconvenient. Whenever leaving to go anywhere, I’ve just tossed the Ego into my purse and that way it’s available anytime, anywhere without any worrying about leaking (which is still an issue with my 510 but less so with dripping). The only problem with my mix is that it was a bit light in nicotine. I still need more nicotine to feel ‘satisfied’ and leave the cigarettes behind.

As I had half the bottle of concentrated VK4 left, yesterday I made a new batch using 16mg nicotine and no extra menthol. It was too strong. Cue the asthma attack central. This morning I added plain (not doubled) menthol to it – not enough to over power it, but just enough to give that added ‘light note’ and reduce the nicotine content slightly. So I’ve no idea of the actual nicotine amount in terms of milligrams, but the mix I have is perfect – it gives me a nice tasting menthol tobacco taste and probably the highest amount of nicotine my body can handle. It’s probably around 14-15mg. Ish. But it works. And this should give me a couple days of vaping.

Added several hours later: I’ve had to further cut this mix with more menthol as the cumulative effect of a vaping it over the course of an hour proved too much for me and the asthma was cued again.  I’ll just keep cutting it back till it works. Frustrating though, once again I thought I had it sorted.

After finding that the VK4 tobacco flavour was delightful, I decided to make sure to have tobacco flavouring on hand. I didn’t really want to order any of the other tobacco flavours Vape King has on their site, aside from the VK4 of course. So I shopped around online and came back to probably the best e-juice site in Australia –JuiceWhore. I ordered her Tobacco sampler #2 which includes a flavour that I hear about in the AussieVapers forum all the time – it’s named Del’s Ultimate Pipe, and given the rave reviews of it hope it’ll be as nice as everyone tells me it is. The Sample pack has 5 different types of flavours, all 5ml doublers, so they each will mix up to 10mls, for a total of 50ml altogether. That should see me through for a while.

Meanwhile, I’ll keep working on strategies that will make my use of cigarettes something in my distant past. I do feel I’m making progress, even though it’s been slower than what I was expecting.

In other news, I’ve created a new Twitter account just for vaping friends and sharing my vaping experiences (not to mention asking dumb questions and getting quick answers!). You can find me as @Flittervape.

Out with the Old, In with the New

30Jul19 New vape tank on the left and interesting refillable vape pod on the left. I visited a new vape shop the day before and had a lovely chat with the owner and his wife. The tank is a Uwell Crown v4 and it’s really pretty. I’m happy with the tank but not sure about the coils for it just yet. I seem to be going through them way too fast. I like the pod for when I’m using my tablet. No leaks, seems to last forever and although it’s not a great big burst of clouds, it’s enough ...

Don’t Tell me I’m a Smoker

Gift Certificate Give Away

Blowing off some steam