I just finished reading over the last year or so of blog posts as I’d like to write a bit about what I’ve been up to lately but needed a frame of reference that doesn’t appear to be here. In fact, there’s a lot missing perhaps because I shared quite a bit of it on Facebook and made the assumption that my blog readers are also my friends on FB. So this is a bit of a fill in the blanks before sharing where I am now.

Last year, on Easter Monday I decided I really needed to get a bit more active and decided to take a walk by the beach. This is something I’d looked forward to being able to do once I had my provisional drivers licence but hadn’t yet done. At the same time unbeknownst to us, Rod’s thyroid levels were dangerously low. On the day I took my walk, I felt as if I’d spent the entire Easter weekend alone and looking back, I had. Rod slept more hours than he was awake. I didn’t wake him before I left, which was also a first for me. I went to Christies Beach Bluff and walked along the trail enjoying the view of the bluff on one side and the sea crashing against the rocks on the other. The fresh sea air felt great. When I was near where the trail ends, a young lady passed me with her dog. At the end of the bluff she stopped and started doing yoga stretches. I was so impressed. What a great place to exercise with the sound of the ocean, fantastic view and fresh air. What happened next isn’t anyone’s fault. Her dog (medium sized) noticed me and came over to greet me with more enthusiasm than I was prepared for – he jumped up to say hello to me and I toppled like a rag doll, spinning around trying to catch my balance. I landed on the sharp rocks and I’m lucky to have escaped with only a broken rib. The young lady came to my rescue as did another older couple and I ended up having a ride in an ambulance to the local hospital. Imagine Rod’s surprise when I rang him and told him he’d have to get the neighbours to drive him to the beach to pick up the car!

That fall set me back quite a bit more than I realised at the time. It shook my confidence and over time I noticed that I had many many near misses with losing my balance and nearly falling. Fortunately it was often while getting dressed or standing up from my desk and if I did lose my balance I landed in either my chair or my bed.

I saw my rheumatologist in August and told him about my fall and the near misses since then. He offered a suggestion that has truly changed my world. He recommended me to the Falls Clinic at the Repatriation Hospital. Normally they only accept older people but made an exception for me. I had a few appointments with a specialist that included blood tests and a brain scan, then I was enrolled in the clinic. 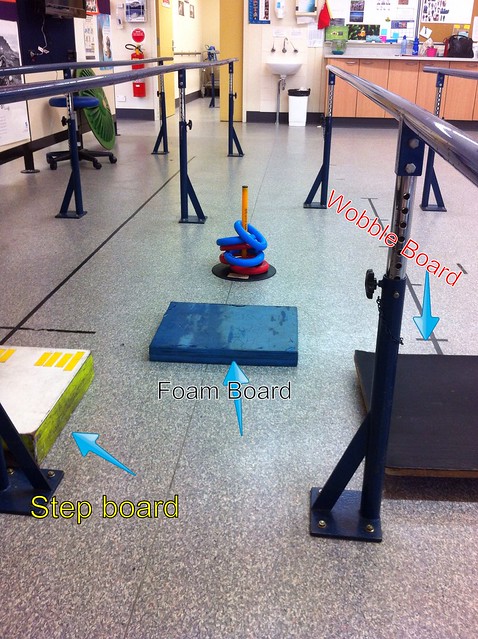 Twice a week for a month I attended two separate exercise sessions with a bit of an afternoon tea break in between at the Repat. Each day was an hour of balance exercises and an hour of strength exercises. When I graduated from the clinic, I had the option of continuing to use the gym at the Repat or take part in one of a few different options for older people locally. And the third option was to join a gym on my own.

After a few weeks of driving to the Repat to use the gym twice a week, I was pretty keen to find something more local. I checked out the choices and decided to with a gym membership as the cost was nearly the same and I have much more flexibility in what days I go and what equipment I can use. My other consideration was the age of participants. I’m probably one of the older users of my gym, but I think it’s healthier for my psyche than spending time with the older crowd. I’m still going twice a week but my time at the gym has increased to a couple hours as I’ve increased the time I spend on some tasks or do more repetitions. Most importantly the last fall I had was two months ago. I’m much more balanced and I’m feeling better both in confidence and physically.

I have a few items I use here at home for the days I don’t go to the gym – a mini stepper that imitates walking up stairs – this requires I really work on my balance, and I have a mini cycle for my arms. It helps a lot with the lymphedema issues I have.  My latest addition is a little device called a Fitbit. It’s a pedometer but also measures any climbing of stairs and is a great little motivator. It syncs to the website whenever I’m in rang of my computer which is also pretty cool from a geek perspective. I don’t have to hand enter any data.  I love this little device and love that when I’m more active it grows a little flower. I’ve also seen it send me cheery little messages like “You Rock Gaelyne!”.  Aww. Everyone needs a bit of encouragement now and then.

So that’s where I’ve been and where I’m going. From very little strength to enough to stand up, walk and not fall over! Coincidentally as I looked at the photos I took the day of my fall last year I was really surprised to note that it was one year ago today. I’m very tempted to take a walk along the same trail just to prove to myself that I can, and to get over the last bit of fear in facing the memory.

Added later in the day: I did it.  After talking it over with Rod about whether or not he wanted to go with me, and if he thought I was OK to go alone, I went to Christies Beach bluff this afternoon and had a lovely – and emotional walk to the end and back. I stayed away from the rocks and only walked on the side that’s parallel to the bluff. I had a few tense moments as people walking their dogs passed me but I made it. I feel so much better for having made the trip and faced my fears.

Oh, and I should also mention that I now have my full drivers licence as of a week ago. Whoo hoo!

12Feb22 I woke up a bit confused because this routine should only play on the first Saturday of the month rather than every Saturday. YES. This is an Alexa routine, not an Apple Homepod routine. In this instance, Alexa is able to do more (like tell me the date and read my calendar to me) than Siri. But that's OK. I'm happy to use whatever works. #2022pad #alexa #routine #wakeup #latergram

06Sep22 It was a beautiful and warm afternoon. I had an appointment not far from the beach so I decided to have a long walk on the esplanade. I took this near the end of my walk - you can tell by the little bit of of pink on my nose. My earrings decided to be a bit wonky but the rest of me looks pretty darn good for an almost 61yr old! #2022pad #beachwalk #beach #christiesbeach #cf22 #wonky

Try not to giggle