Apparently having family and family pics on Facebook brings out the best in me in terms of writing about memories.  As I wrote 2 rather long comments / wall posts or whatever they’re called this morning, I reckon I should share them here in my blog. First up, my niece, who was adopted and only found her birth mother (my sister) a few years back met her grandmother the week that my mom passed away. This morning I read Facebook and she sweetly asked: “Auntie Gaelyne tell me what my grandma Jean was like. you said under one of her pics that she was fun. please tell me more” …  How could I resist that request?  So this is what I wrote this morning…

She was the best Mom. She really was. Always managing to cleverly teach us about things even as adults by example. I found this especially when I was a young mother and had no clue. She’d just step right in and distract the acting up kiddo and in no time any tantrum, bad feelings, etc had disappeared.

She was fair and honest – if she told even the littlest white lie she’d feel guilty. She was in hospital once when I snuck up to see her (was only 12) and the nurse said that kids had to be 13 or 14 to visit. She told the nurse I was that age and then felt guilty about it for the rest of the visit. She’d try to always do the same or similar for each of us kids. Like on Christmas she’d try hard to make sure everyone had the same amount of stuff or for Grand kids if she did for one, she’d try to do the same or similar for each of the others. I suspect we were each her ‘favourites’. 😀

Grandma Jean’s favourite things to do included rummage sales, bargains, fishing, travelling in their RV and visiting us kids. She’d save things in boxes for us and then either give them to us when we came to her place or bring them to us when she visited. Stuff she’d found at rummage sales or stuff like Readers Digest magazines she’d finished. Grandpa Bill worked for Dow, so she had a discount card for their store and would stock up on ziplock bags, saran wrap, etc for us. One year she gave each of us a big box of that stuff for Christmas. It was great!

But most of all, she was fun. We could laugh together and there were times that Aunt Pam, Grandma and I would be near tears from laughing so hard – usually from something silly she said wrong or some mild misunderstanding of what she meant and then we’d be in stitches.

Oh, and she had a lead foot in the car. I was always reminding her what the speed limit was. LOL.

I hope this gives you just a tiny glimpse what Grandma Jean was like – I sure miss her heaps. Feel free to ask me anything – I love writing and reminiscing about just about anything! 😀

More pics of my Mom: 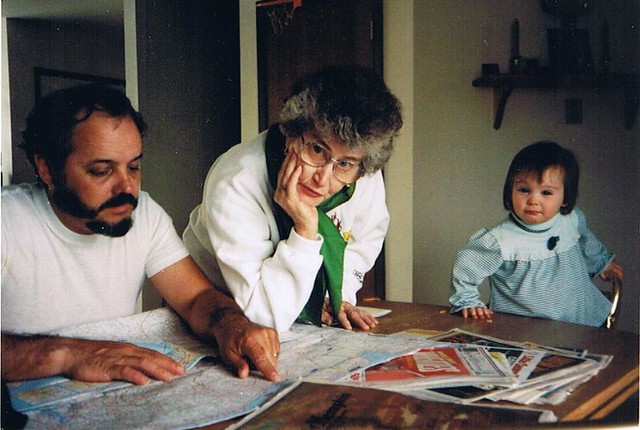 Then later in the day my dear brother uploaded a couple more old pics – including one that nearly brought tears to my eyes – my cat, Tommy. I have missed that old cat.  I had him from the time I was 11 or 12 until he died when I was 23.  So I ended up writing a bit about him too…

.. Just showed him to Rod and said I loved him more than I loved him, my kids or anyone else in my life (which probably isn’t quite true, but close). This cat just accepted me and loved me even while going through all that teenage angsty stuff.

Tommy disappeared for about a week when he was a kitten. One day on my way out the door to go to school, there he was, on the porch. He’d been hit by a car and dragged himself home, somehow. My sister and brother organised to get him to the vet, and bless them they decided to pay the costs of getting him fixed up (he had a broken both his hip and his leg). They couldn’t ‘put him down’ because they knew he was my cat, and I wasn’t there to make the decision, but really that’s a decision I couldn’t have made myself anyway because I wouldn’t have had the money to pay for his surgery either. From then on, he’d sit with his leg out as that was the only comfortable position for him.

He survived my weird teen years, a few years with my brother when my family moved into a new home, and then came back to me later when I had my own place. He then survived my first born as a youngster, but had to be put to sleep while I pregnant for me second son. That was a hard hard time for me, but he was old, and he was in pain.

When my brother taught his young pup Sommer how to shake paws, he inadvertently taught Tommy, who was very selective about who he’d shake hands with (like only me). I remember telling my husband about this ability then seeing his jaw drop to the floor as Tommy and I proved it to him. 🙂